I arrived in Cartagena with a small group of friends one afternoon in July. The weather was incredibly hot and incredibly humid. As our uber approached the AirBnB, the first look we had of the city pretty much summarized our later experience: Cartagena is a coloful, lively town filled with music, delicious food and kind people.

The wall that used to enclose the city during the colonial period now surrounds the historic part of the city, the neighbourhood of San Diego. Here are the oldest buildings and most famous landmarks, and the wall itself is a useful thing to be guided by. On our first day we did some walking around the wall and some exploring of the main square. You’ll find that any place you’d like to see in Cartagena can be walked to, which is amazing. At night, the best places to go to in San Diego are around the Clock Tower, an unmissable yellow building in Plaza de la Paz. The city at night

Still in the old town, to the north, there’s Gabriel García Márquez’s house, which is a museum now, and a bit further is the Plaza de las Bóvedas, where you can find a lot of colombian handicrafts and souvenirs, as well as the famous, colorful coffee carts that go around the city. In San Diego you’ll also see many horse-driven carriages, which I found really heartbreaking. The weather in Cartagena was around 35ºC, and to see these horses take groups of as much as six people along the winding streets, trying to avoid traffic, was just too much. Considering they’re only used by tourists, I think it’s fair to say that it’s visitors responsibility to stop this kind of abuse.

Anyway, the houses in San Diego are something to see, too. They combine some colonial architecture with the bright colours of the Colombian flag. Most balconies are filled with colorful flowers and the paint of most buildings is bright and lively. If you want to listen to some traditional music, you should go to Plaza Bolívar during the weekend, and take a look at a real “chumpeta” band. If you’re into it you could even dance, many people do. As our AirBnB was in San Diego, we pretty much walked anywhere inside the walls and to Getsemaní. No matter the hour, there was always music playing somewhere (mostly reggaetón) and some laughter can be heard in the distance.

Cartagena’s streets in the rain 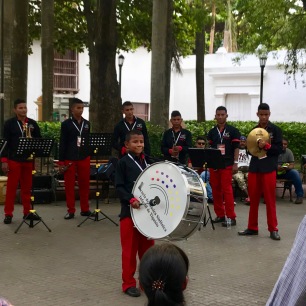 View from the wall

Cartagena’s streets in the rain

The city at night

The walled city is also where all the restaurants and shops are. On our last day we had an amazing breakfast at Mila Vargas, which is a bit expensive but delicious (Mila Vargas is, I understand, some sort of Colombian Martha Stewart, so no matter the hour, try the cakes!). Another food place I recommend is called Laguna Azul; it is not fancy at all and it’s not really in San Diego but in La Matuna. However, it has the best seafood I had in Cartagena and they fetch you any beer you want from the store next door. Try ceviche de camarón. If you’re into seafood (which I wasn’t much before going to Cartagena), you can also visit La Mulata, a very centric spot with very good food. Bear in mind though that most things are a bit expensive in the centre, as it is the most touristic area. Another thing everybody told us to do was to watch the sunset from Café del Mar (it’s not café, it’s a bar), which has tables with view to the sea. Unfortunately, July is the rainiest month there and the clouds would barely let us see the sun. It is a nice place though. Apparently, Getsemaní used to be one of the most dangerous areas in Cartagena. Now it is denfinitely the most popular one. If you want to take a tour with a local, be at Plaza de la Santísima Trinidad at 4.00 pm. The plaza is in front of a nice 17th century church with a bright yellow facade. Not very far from there, on Calle de San Juan, is Café del Mural, one of my favourite places in the city. If you sit outside you can have a look of the street, which is one of the most beautiful in Getsemaní. The walls are covered in steet art and there’s an art gallery nearby which hangs its paintings outside. In general, Getsemaní is a wonderful place to be. You can just walk down the streets and there’s something to see, from quirky statues to majestic art on the walls, almost everywhere. It is a pretty safe neighbourhood too, and you’ll notice many people just go on about their business leaving their front doors open. 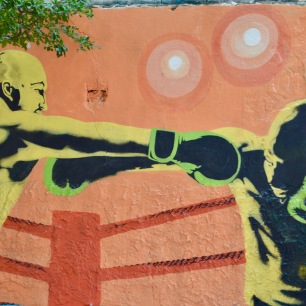 Although Cartagena is in the Caribbean, I was a bit disappointed to see that its beaches are not very pretty. In fact, not many people go there. The most beauiful beaches are not in the city but down south a bit, in a little peninsula that belongs to the National Park Corales del Rosario. Playa Blanca is there, but getting there was quite stressful. If I had to name the thing that I liked less about Colombia, it would be the peddlers. They’re everywhere and they insist a lot for tourist to buy their handicrafts, boat trips or whateever they’re selling.

If you approach the Muelle de los Pegasos, the port from which most small ships sail, you will be quickly surrounded by five people trying to sell you a boat trip to Islas del Rosario, a tour of the city, a ride to Playa Blanca and pretty much anything. Dealing with these people can be quite hard as they can even fight among themselves for a client. When we were there, out initial plan was to visit Islas del Rosario, but the trips offered seemed so overpriced and the people were so pushy that we called it quits.

So we decided to go to Playa Blanca instead. Taxis wanted to charge us 50 dollars, and an uber was only about 30. So we took an Uber. After all, it was just a one-hour ride. So far so good, we were all happy that our day trip wasn’t ruined. Until our Uber driver got lost. We ended up who knows where and the car could barely make it on the unpaved streets. At one point we had to get off the car for it to get out of a hole in the road. To this day I’m thankful our driver didn’t lose and just left us there.

After two very stressful hours we finally made it to Playa Blanca. If the peddlers in Cartagena were extra, the ones in Playa Blanca were scary. We hadn’t even gotten out of the car when a group of five or six young men started trying to rent us hammocks, chairs, offering us lunch, drinks. The followed us for about a kilometer along the beach, which is really beautiful but filled with restaurants and a bit crowded. Finally we gave in  and rented some chairs at one of the places they offered us, we left our stuff and swam a bit and everything was okay again.

Being in the ocean was better too because peddlers could not reach you there. As soon as we were sitting, people started coming to offer us massages (which I paid for), coconuts (which I bought) and jewelry (I resisted). Soon, however, it got late and we ordered lunch. This was, no kidding, the best food I had in Colombia (probably one of the best in my life too). We had a huge, fried sierra fish for three of us, as well as patacón (some kind of small cake made out of fried banana) and coconut rice with Águila beer. It was truly amazing. Most places in the coast serve this fish-patacón-rice dish, but this was by far the best. After this we just chilled and later it started raining. We swam in the rain and left Playa Blanca at around six pm, only to find Ubers did not come this far and most people were already gone. Also, we did not have towels. It was a funny day.

Playa Blanca is, in short, a great place if you got some willpower against peddlers and if you have some fresh fish for lunch. It was a very exciting day and, even if this was for the wrong reasons some of the time, one of the best of our Colombia trip. The beach there is a typical Caribbean beach: clear blue waters, palm trees and white sand. And in the end we did go to Rosario Islands, just for half a day to a place called Isla del Sol. Apparently most of the islands belong to private owners and you buy some sort of all-inclusive package for a day (transport, food, hotel facilities). I prefered Playa Blanca.

Have you been to Cartagena?