Apart from its beautiful beaches, pink lakes and mouthwatering food, the Mayan Riviera is also known for its many cenotes. A cenote is basically a hole that exposes an underground body of water. There are more than 6,000 cenotes in the southern peninsula of Mexico, and while the biggest ones are taken care of and charge you for entering, there are many small ones where you can just jump in (at your own risk). Cenotes in both Yucatán and Quitana Roo are part of an underground river that still flows, so the water is crystal clear, cool, and clean.

One of the cenotes we visited is only 20 minutes away from the archeological site of Tulum, in Quintana Roo, and it is called Dos Ojos (“two eyes”), because there are two main bodies of water in the area, connected by tunnels. Altogether, there are five cenotes there and the entrance fee depends on how many you want to visit and wether you want to hire equipment. We hired a somewhat basic tour of the main cenotes and an area called the “bat cave” because, well, it is basically a cave with a lot of bats. So, for 300 mexican pesos we got some snorkeling equipment and diving suits (yes, it was like 35ºC outside but the cenotes were cool and the water was COLD, so get the funny suit). The tour took around 45 and there were only like 8 or 10 people including us. Afterwards we could stay there for as long as we wanted. Best spent money of the trip, let me tell you.

The tour is really okay. It was not, thank God, one of those wannabefunny tours, but an informative account of how cenotes came to be, which animal species live there and other interesting facts. But the real reason the tour is worth it was the bat cave. Without a tour guide there is no access to this area, because it is quite difficult to get there: there are narrow passages, very shallow and very deep areas, and it is in complete darkness (they give you flashlights but still, it’s important to be with someone who knows the way).

The cave is small and its roof is comepletely SWARMED with bats. It is really a surreal experience to hear them chirping and feel them flying around you. Also, the cenotes in Dos Ojos are not really “open”— there’s an opening on the side from where you get it and where the light comes in, but they’re not open from above like other cenotes. This means you can’t really see the sky from the water. Instead, the roof is covered in stalagtites (and stalagmites will most definitely mess up with you) and the light that manages to come in has a blueish colour, which I think is way cooler.

Once the tour is over you can swim around, dive, snorkel or just sit somewhere. There are areas for scuba divers too, but you have to present your certification and bring your equipment. The park itself is really big and so are the main cenotes; however, it was surprisingly not crowded when we were there, which was weird after going to Tulum, which was really full. I understand that the park only allows a certain number of people every day because of safety and ecological reasons.

There was an area with lockers and changing rooms where we left our things (and our cameras). I did manage to take some underwater pictures, but I they all look like these: 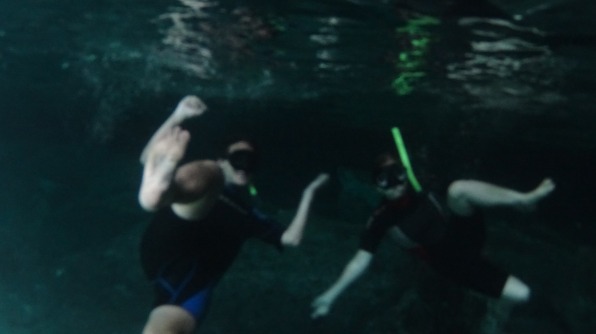 Anyway, here’s a video that hopefully conveys the experience. Of all the cool things we got to do in Quintana Roo, this cenote was really one of the best. It is really one of those places that make you realise how strange and beautiful nature can be, and how there can be a balance between tourism and environmental care. So if you’re traveling to the south of Mexico, cenotes are really a must visit. There are many options, the most famous being Ik Kil in Yucatán, or a very similar but smaller option called Yokdzonot. There are also the ones in Xcaret, in Quintana Roo (this park offers some activities in underground rivers and caves), but Dos Ojos was really an amazing experience.

Have you visited any cenoted? Which ones do you love?