I arrived in Nottingham not knowing what to expect. Before this trip I had spent some time in England—in Cambridge, London and some other places north and south—,but the Midlands remained unknown to me. I had heard of the city only in relation with Robin Hood, Richard the Lionheart and Sherwood Forest. When I arrived, on a bus from London in the middle of the night, my first glimpses of the city were not quite the best. A dirty bus stop and an empty street. And damp cold. However, my first morning there made me realise that Nottingham is one of those cities that transform from day to night and from weekdays to weekends.

On Market Square, a modern explanada with fountains and a few slender trees in front of the City Hall, a big ferries wheel occupied most of the space and that’s now one of the first things that comes to mind when I think of Notts. Even though it’s there for just one season, the wheel against the grey skies and the white building behind is a charming sight. During my stay, the wheel was my friend’s meeting point when exploring the many cafés and tea rooms in the city centre. Though the streets that encircle around Market Square are filled with fast food chains and phone repair shacks, a short walk in any direction will lead to more colorful, narrow streets where pubs, little cafés and handicrafts shops abound. My favorite street is Pelham street, even when it’s dangerously close to Primark.

Boy, did I spend time here. It’s a small and cosy coffee shop that also offers cakes, breakfast and lunch. The service is great. This is the perfect spot to have lunch with friends or a quiet time by yourself with a book, some tea and banana bread (which I specially recommend). It is also a great spot to look around; one of my favourite things about Nottingham was the variety of people that live there and that walk past Pelham Street (where Fox is) every day! Guys in black leather outfits, girls with corsettes and piercings, tattoos everywhere, guys with cardigans that looked out of the Hamptons, girls that look Instagram-famous, elderly couples in the most British jumpers, loud children, young couples with several Primark bags, slender cyclist and lots of university alumni in jumpers.

It’s a little bakery almost in front of Fox Café, which serves some of te finest cakes I’ve tasted in my life. They have a huge variety of cakes (even vegan and so on) and they’re all really good. I used to go there with two or three friends and each one of us would ask for a different cake, then we’d share. The place is small and a bit crowded during weekends though. You can also have a good brunch here.

I wish I had spent more time here, it’s a fancy bar beautifully decorated and with a cool terrace. It’s good to start a night out (though a bit expensive) or play some board games over drinks, if you’re in a quieter mood.

There are plenty of traditional pubs in the city centre and close to the Castle (like Ye Olde Trip to Jerusalem, supposed to be the oldest pub in England, or The Pit & Pendulum, named after Poe’s short story, an eerie kind of place).

Okay, so this place is famous because of Batman. This Elizabethan country house was featured in The Dark Knight Rises as Bruce Wayne’s mansion. But apart from that, it’s a magnificent piece of architecture and currently a creepy taxidermy museum. There’s a gift-shop and a restaurant where you can hang around once you’ve walked around one of my favorite jogging and reading spots in Notts: Wollaton Park. There are plenty of trees, a trail and a lake. It is beautiful during Winter and Summer, and there are red deer hanging around. In a sunny day, this is the perfect place for a picnic and even during the colder months you could walk around or sit on the benches and do some deer-watching. I had never been so close to deer in my life and they are such beautiful, graceful creatures. So yes, this is a must.

This is the famous forest where Robin Hood and his Merry Men lived, as the story goes. It is also the home of the Major Oak! A very huge and very old tree where Robin Hood supposedly slept. Legend aside, the tree is like 10 meters high and between 800 and 1000 years old. Nowadays it is supported by some metallic structure, but it’s still majestic. The forest in general is a quiet, nice place. There are many species of birds flying around, as well as rabbits and squirrels. There are also camping and dining areas with tables and a gift shop at the entrance.

You can also take a look around the University of Nottingham, University Park Campus, a vast extension of land around period buildings, cafeterias and cafés where you can get very good chicken curry (at Portland Building), or head to the Lakeside Arts Club to see a play or listen to some live music. 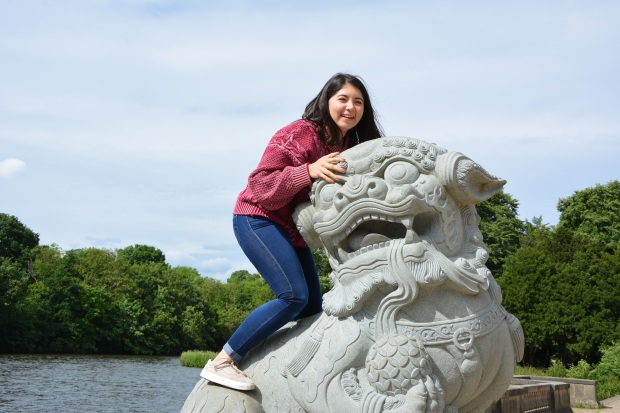