The Trans-Mexican Volcanic Belt is a mountain goes through the centre-south of Mexico, from the Gulf to the Pacific. Here it is known as the Sierra Nevada, and it comprises all of the most famous volcanoes—Iztaccíhuatl, Popocatépetl, Paricutín, Nevado de Toluca—, as well as the third highest point in North America, the Pico de Orizaba. Most of these peaks have snow all year round. All of them are open to climbers and hikers as well, except for the Popocatépetl, also known as Don Goyo, due to its constant activity.

Last Sunday I woke up at 5.30, ready get on a van to Amecameca and then to the National Park Iztaccíhuatl-Popocatépetl, eastwards from Mexico City. I had packed the day before: gloves, a hat, protein bars, water, a compass and signal mirror, a raincoat, extra socks, sunglasses and sunscreen. At 6.30 I was at the arranged location where a group of hikers was to pick me up. They were a bit early and we were soon on our way to the Iztaccíhuatl, one of the most famous volcanoes in the volcanic belt that crosses Mexico from east to west.

It took around 1 hour and a half to arrive at our first stop, the small town of Amecameca. Amecameca looks just like any other town, except for the two giant volcanoes that loom in the background. No matter where you go in the town, you can just lift your head a bit and see the Popocatépetl’s white top and an occasional smoke. You can also see the many signs informing of the evacuation routes in case of a volcanic explosion. The Izta, or Ixta, also looms in the background, a more tranquil and less imposing shape that is actually formed by seven small volcanoes.

After breakfasting in Amecameca we got on the van again and used the next hour or so to put on our hiking boots and jackets. We were going to start hiking on an altitude of 4,200 meters above sea level up to as far up as we could make it. Both the Izta and Popo are in the National Park and, in between of them, there’s an unmissable pit stop called Paso de Cortés. If the weather is nice and the visibility good, as it usually is in December, you can see the five most famous mountaintops of the country (which happen to be volcanoes) from here: to the North, the Iztaccíhuatl; to the south, the Popocatépetl; to the east, la Malinche, and a bit further behind in the same direction, the Pico the Orizaba (the highest point in Mexico); and to the west, the Nevado de Toluca. Paso de Cortés also offers one of the best views of the Popocatépetl, but alas, no toilets.

From Paso de Cortés to the place where we parked and started the hike, La Joya, the views are also exceptional. The region’s vegetation is mainly composed by pines, oyamels, oaks and alders. Higher up, the vegetation is the same as the one you find on mountaintops in northern regions of the globe, low grassland known as alpine meadows, very uncommon in Mexico. Among the animals that live there in the mountains there are white deer, foxes, rabbits, coyotes and the very famous teporingos, an endangered species of rabbit with rounded ears. All the way up to La Joya is just tall trees towering up to where the eye can reach, and a green light inundates the highway. It was a hell of a bumpy ride.

La Joya is your typical National Park parking area. Backpacks piled next to cars, hikers putting on their jackets and tying their boot laces. That’s where we begun. We had with us a mountain guide. It is very easy to get lost because the grassland covers the paths almost completely. There are six different hiking routes, we went from La Joya to our first stop, Boca de Tiburón or Shark’s Mount (a triangular cave that gives the impression of being a shark half out of the ocean). That took around two hours. Being early December and a perfectly clear day, three layers of clothes were okay, I did not need the jacket until the way down. The path was frozen in some parts and muddy where the snow had already melted, so hiking sticks are very handy. Overall we found perhaps ten other people, it is a fairly tranquil place.

The last stop in our itinerary was 4,800 meters above sea level. We stopped next to the cascades, a parallel spot to the one called Ojo de Buey, but lower. At this point, the huge clouds of smoke that the Popocatépetl expelled gave the frozen grass and ocasional ice stalactites hanging from the rocks a surreal air. It was too cold to believe that we were walking right next to a smoking volcano, and yet we were. The winds rose at 3.00 pm, when we started going down. Looking down all we could see was grassland and, beyond, only the clouds.

Walking at this altitude can be a bit tough, I don’t think I’d ever done it before. Our mountain guide told us at the beginning that the trick not to run out of breath was to take small steps and never big leaps: to walk slowly, one foot barely in front of the other with no rush, but never stopping. The beauty I find in hiking comes from the same principle: you’re not running a race, you’re just walking. Setting one foot after the other repeatedly becomes hypnotic, it is a retreat into an internal world that is somehow intimately connected to the outside world. Your footsteps blend in with your surroundings, your breath acquires the same nature of the sounds you hear around you, the rustling of leaves or the chirping of birds. It is a paradoxical activity, for even when you’re with someone else, you’re really alone in the world, and also alone with the world. And wherever you’re going, when you get there your only reward is to look back in exhaustion. There’re few better rewards in life. On this hike I remember thinking, “I am as tall as the clouds”. It is a great feeling. 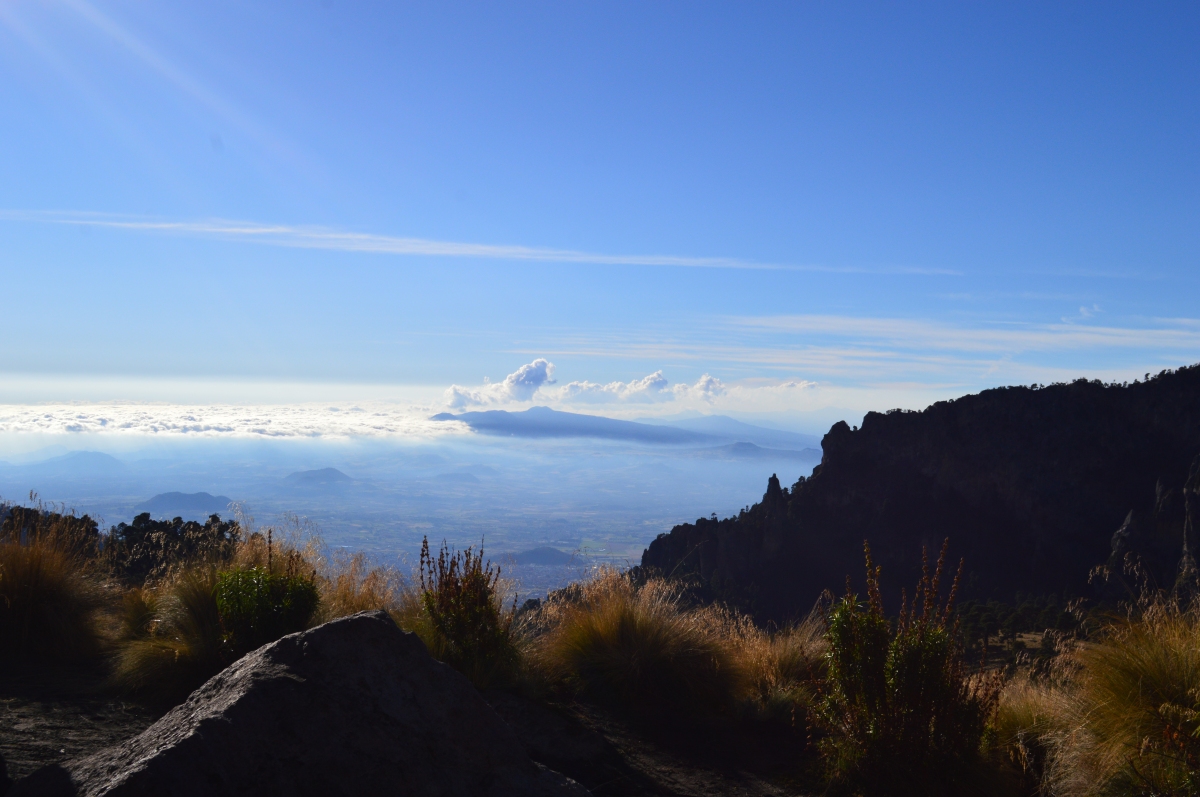 Hiking the Izta is a part of a list of hikes in Mexico I intend to do before fall 2019. Next on the list are: La Malinche, Nevado de Toluca, Desierto de los Leones and Pico de Orizaba. I’ll keep you all posted.