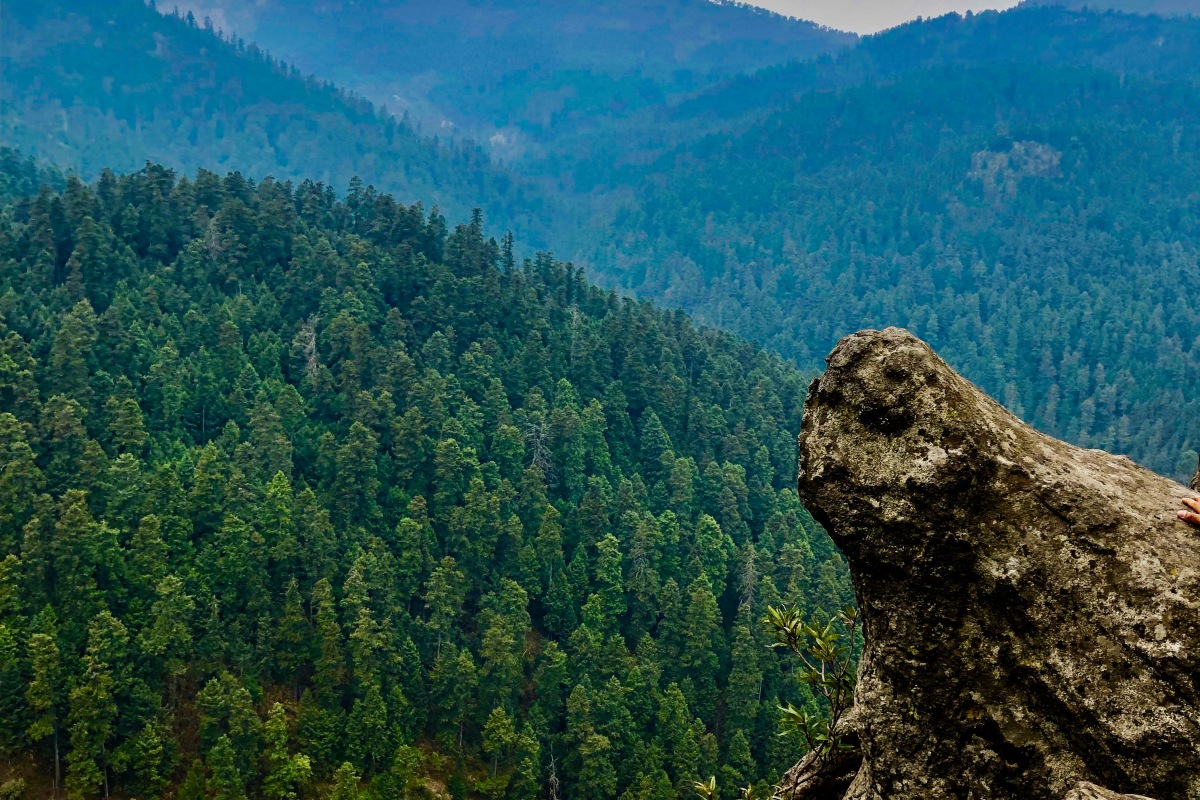 Last Sunday I woke up at 6:00 am to pack a small backpack and make some pb&j sandwiches. I dressed quickly and walked some 20 minutes to where I was supposed to meet with other hikers, a lonesome gas station near Coyoacán in Mexico City. For the first time in a long time, I was early. We left the spot before 8:00 am and headed south.

“This place is, no kidding, just thirty minutes away from the city”, our guide was saying. If you’ve ever been in Mexico City, you probably know that there is no such thing as undisturbed nature close to it, so I was skeptical about the hike. We passed huge malls, taco stands, gyms, dirty roads and trafficked avenues heading towards San Jerónimo, one of the oldest neighbourhoods in the city. At some point the fancy houses gave way to smaller, older buildings, small churches and cobblestoned alleyways that make you feel like you’re not in Mexico City anymore.

And eventually it all ends. What follows, if you keep going south, is neither a road nor a highway, but some sort of rural path wide enough for two cars, with food stands all along the way. All I could think was,”where the hell are we?”. In front of there was a forest. Thousands and thousands of trees seemed to have appeared out of nowhere. I lived in the city for almost five years and I had no idea that this existed, a green lung still providing oxygen for the monster city. This was not, however, anything like Chapultepec, the most famous forest/park in the city, made tame with paved paths and trash cans. This one was just a forest, a real one.

The van made its way into it and I was relieved to see there were rangers blocking the way under a green sign that read “Parque Nacional Los Dínamos“. They asked us if knew where to go and how to behave. “It’s a protected area, one of the last clean rivers of the area is here”, they explained, “be careful and don’t get lost”. We drove further up to a place called La Bodega, where there were a few parking spots, a small restaurant and toilets. We parked and got out of the van.

Many of my visits to natural areas in Mexico have been marked by the fact that there is trash everywhere. It is so in many beaches, mountains and parks, so I was pleasantly surprised to see this place was clean once you made it past the entry sign. The restaurant didn’t offer disposable packaging and people living in the area—for there were some houses at the very beginning of the forest—seemed to take care not to let any trash reach the river. The only other place I remember to have been so clean was the Iztaccíhuatl.

We refilled our water bottles, adjusted our shoes and backpacks, gor out our trekking poles and started upwards, for there is nowhere to go but up. There were three peaks we wanted to reach, each one higher than the other. We started fairly high already, some 10,500 feet above sea level, and finished at around 11,500.

The first part of the hike, about one hour long, was the hardest, for the rise of the terrain was steep and there were logs blocking the way, as well as loose stones that seemed fairly steady at a first glance. The higher we went, the livelier the sounds of the forest became: chirping birds, bubbling brooks, creaking trees, croaking frogs and an ocassional unidentifiable sound. The forest comprehends 429 hectares, so I can only guess that many animals live there, although I just saw birds. Right when the terrain gets more even you get the first views of the forest, an expase of nothing but trees and rocks rising towards the sky, undisturbed. I am still baffled at how a forest like this can exists so close to Mexico City.

After the first peak we walked for another 30 minutes or so, this time on easier terrain, towards the second one. The most difficult thing here is the loose ground, which makes it kind of slippery. The temperature here starts descending and the fog rising—speaking of which, can anyone recommend good hiking boots for both warm and cool weather?—. The vegetation also changes, now there are mostly pines whereas at the start there are many ferns and brackens too. The second peak offered a view that I can only describe as beathtaking.

To get to our last peak we just had to walk half an hour more. The terrain became steep and more slippery now, but it was easier than the first bit. The fog came and went, and the air felt cold and fresh. At the beginning I was wearing a polar jacket, but that proved too hot once I started walking, so I took it off. Now, almost at the top, I was cold again, so I took a very thin cotton sweatshirt from my backpack, it was enough. In the last peak we met another group of hikers and a dog, so we talked and had lunch together there for a while before making our way down. The views from the last peak are like nothing I had seen before: trees and trees, each one a different shade of blueish green, and behind them only mountains and rocks.

Not many things can compare to a walk in the woods. This forest is like an oasis in the middle of a concrete desert, and I could not be happier to know I’m so close to it.

Processing…
Success! You're on the list.
Whoops! There was an error and we couldn't process your subscription. Please reload the page and try again.